Since the murder of George Floyd by Minneapolis police officers, we have been trying to figure out what to say to you about the moment we are in. As an office predominantly of white women, we are acutely aware of our desire and duty to raise up the voices of people of color. We are also acutely aware of our responsibility to speak up to our fellow white people about our role in the oppression of black and brown people.

The list of African-American lives taken by state sanctioned violence is too long, and it has been for too long. This has been the nation’s truth for 401 years, since the arrival of the first African slaves in Virginia in 1619.

There is a first right thing to say: Black Lives Matter.

There is also no one right thing to do. There are many things to do. It is on white people to listen and be present for the anger, sadness, fear, anxiety, justified rage, and confusion that has come forward in the wake of George Floyd’s murder. It is on white people to understand that each day that passes brings more anger, more sadness, more injustice, and few new words to express that cacophony of feelings.

It is on white people to take action to change the racist systems in which we operate. As a consulting firm to nonprofits, we are examining our own role in the creation and the demolition of the racist systems in which we operate. We will continue to examine and leverage our privilege to raise up the voices, causes, and perspectives of our black and brown comrades. We will protest and/or support protesters and organizations working for racial justice.

Last week, recognizing that we hold power as facilitators of nonprofit meetings, we changed each agenda to start by holding space for expressing the sadness and distress felt with the latest manifestation of police violence against African-Americans. We offered everyone in the meetings the chance to say personally how the trauma was impacting them and their community. As we facilitated and listened, our clients of color in particular noted that they had been in numerous meetings that same week where the subject of George Floyd’s murder was not raised. The relief and pain meeting participants expressed just to have a space to say out loud and share with peers was striking.

That is our starting place in this time that calls for renewed commitment to be working towards racial justice, and it will continue to be our practice. There is more action needed in the days ahead. We acknowledge, and are led by, many of our clients who have been on the journey to address racial justice and community accountability for many years, particularly our clients working in youth-led organizing groups, federally qualified health centers, certified mental health centers and domestic violence agencies.

We stand with everyone fighting for racial justice. We ask that you help keep us accountable to our commitment. Let’s continue the conversation, the sharing, the protesting, and the love, as we do our part to establish justice. 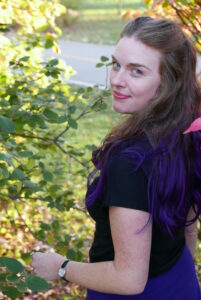 Mac is a writer, year-round biker and supporter of Chicago’s Active Transportation Alliance, a frantic knitter, and an avid fan of superheroes–both real and imagined. Her current music obsessions include Ludovico Einaudi, Of Monsters and Men, Nina Simone, a renewed love of The Smashing Pumpkins’ Mellon Collie and The Infinite Sadness, and pretty much every song Rage Against the Machine has ever released.